Back to all posts

In the words of our late, dearly beloved Fakir:

“Physical difference frightens people in our culture more than anything else. You can be aberrant as hell mentally, politically, socially, but do one little thing physically - put a bone in your nose - and boy, you're in trouble!”

I was that child who cut off all my hair. I wore the dress my mother shoved me into with a spiked dog collar and thought I was so cool.  My peers wore high ponytails and proudly presented the straps of their "training bras." I was ten. Ouch. Doesn't that hurt? Why would you do that to yourself? I just want to wear a tee shirt.

Why did boys and girls have a separate locker room/bathroom? What were they trying to prevent? Couldn't two hormone dripping pre-teen make out with the same kind? Couldn't anyone molest anyone? We only had like three minutes to change. I was told it was because our bodies looked the same. No. They did not. My body had extra tissue up there when it shouldn't have. Some people had hair where others did not. Some people had more fat, muscles, or freckles. People could be more than one race. Why couldn’t people have more than one gender? I was thirteen.

I sunk myself into the nearest community that agreed with me: the punk scene. I made my own clothes and memorized the teachings of Iggy Pop, Kurt Cobain, Henry Rollins and Kathleen Hanna.

Shit. A lot of these people died at 27. I probably will, too.  People wanted to date me and that became a nightmare of its own. “Don't touch me there. I didn't mean that. Please don't call me that. I know it's my name. can we make up a new one? That's too weird? Okay nice knowing you.”

I didn't think I would last very long. I was constantly getting my ass kicked at home and in the scene that was supposed to support me. I was depressed. I climbed trees to read books alone. I did not understand my friends anymore. I bound my chest with an ace bandage and duct tape. I had to leave the mosh pit early or I would pass out. I was anxious and I couldn’t breathe.

I hide online to learn about tattoos, stretched piercings, scarification, tongue and genital bifurcation; body modification. Guess where? IAM/BME. “I am going to start doing something about this body of mine.” I felt less alone, less wrong, less blamed, less ashamed. I watched other people's suspensions but decided I’d know mine when it was time. I was sixteen.

I felt less threatened by my body when I learned I could decorate it. The pain I experienced was on my terms now. Catharsis. The layers of abuse in my past healed with modifications. I gained 160 pounds and I lost it.  “Look how much I can change my body.” I binged open-mindedness and I purged closed-mindedness. I needed to find balance. I went vegan and started to care about having a future. I became disciplined and determined. I was nineteen.

I became friends with the people I spoke to online in real life. I met Cere Coichetti, he threw my first hooks. Cere said, “Close your eyes and imagine yourself in the air. What do you look like?” 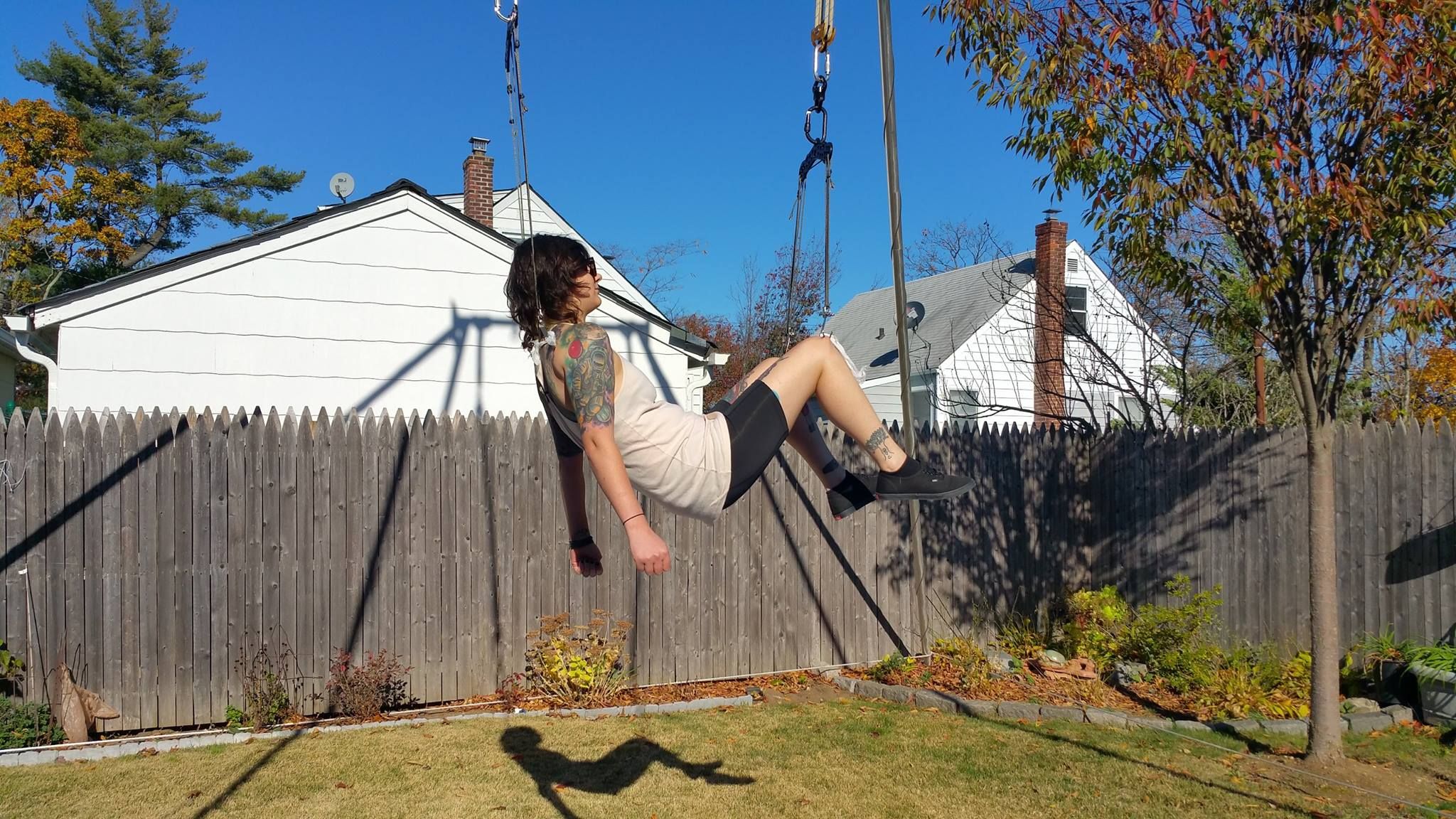 I had two hooks in my back and I was smiling. When my feet left the ground, so did the weight of the world I carried between my shoulders. Cere invited me on a camping trip to hang out with his friends. I guess they were my friends now, too! These were more than friends. They were people who had suffered like I did, inside and out, on both sides of the hook. They became family. My hook family. 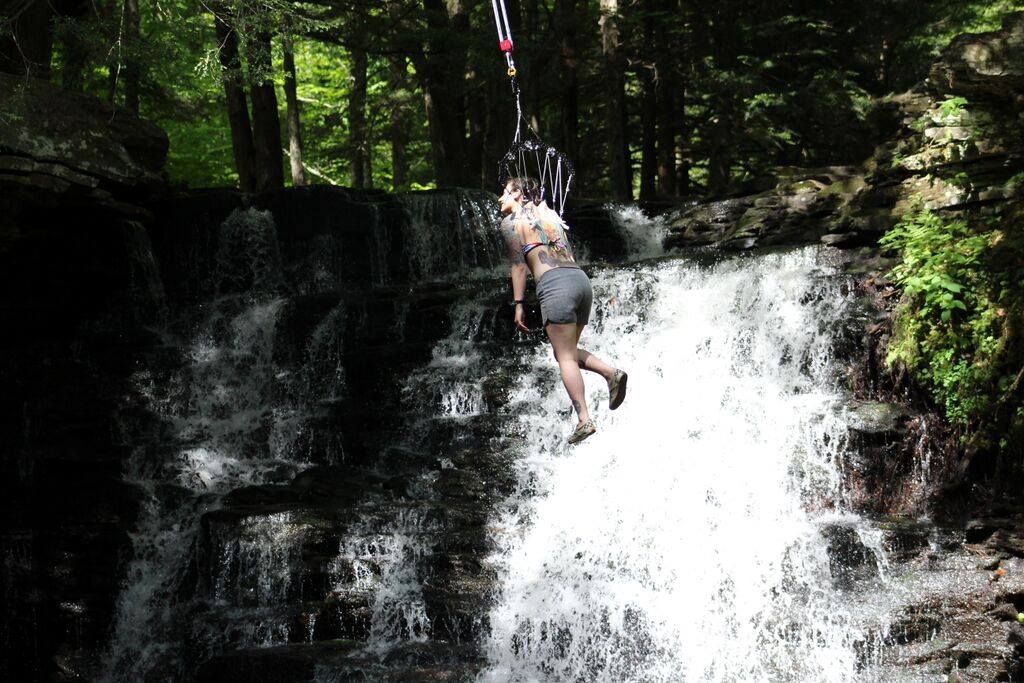 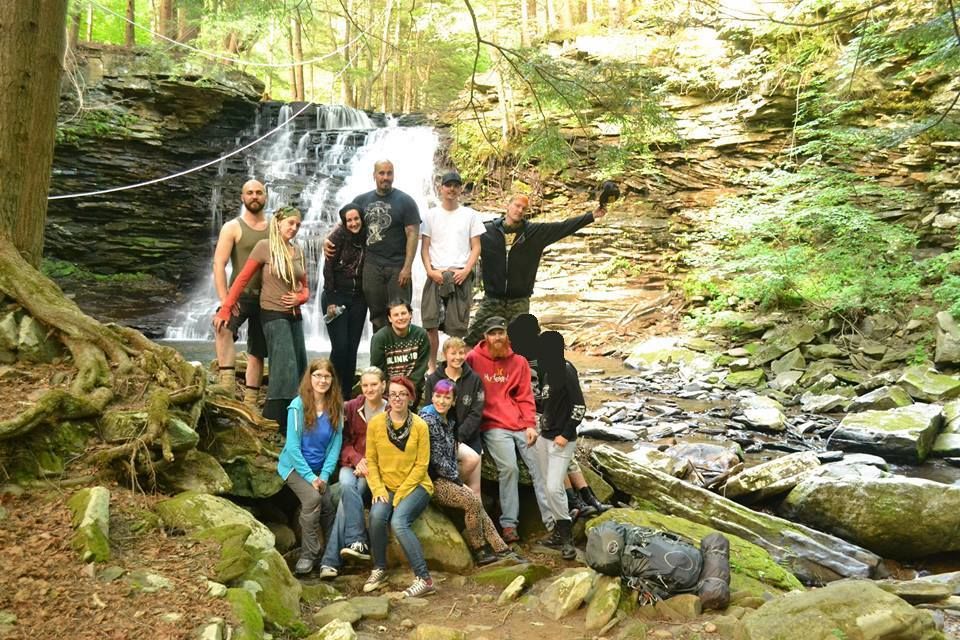 I invited a friend over to my place. I was living in Philadelphia in a seventh-floor apartment across the street from to the LGBTQ community center. This same place once kept me from killing myself. Their therapy had been tough, but worth it. My identity was not just a phase, it was everything I am. This friend threw my elbow hooks. They then attached the rig to a balcony that overlooked the LGBTQ center. I pulled against my hooks, settled into myself, and spoke about gender dysphoria, body dysmorphia, and ways to set yourself free. 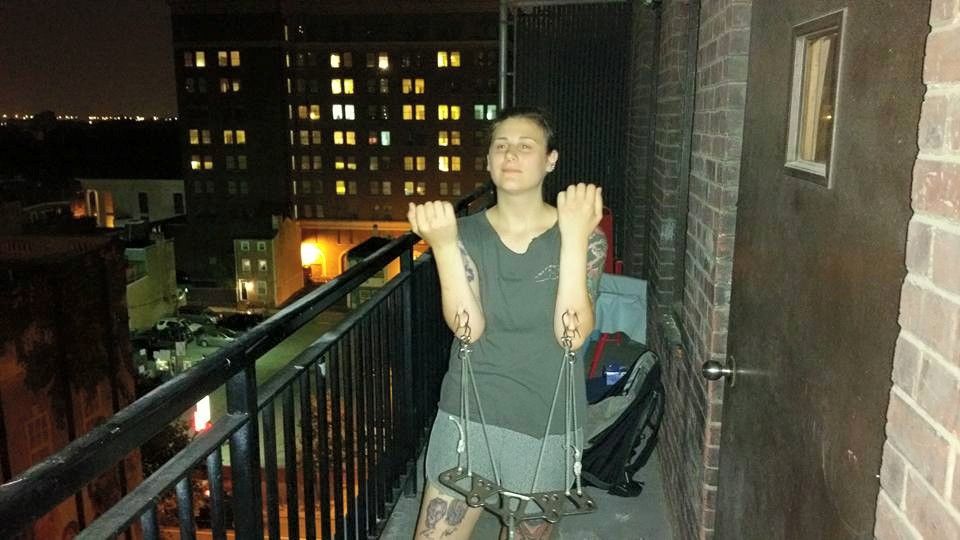 I met more family. Dom Arduino from Invisible Self introduced me to Steve Truitt from Ascension, who invited me to suspend with him at the villain arts tattoo conventions. 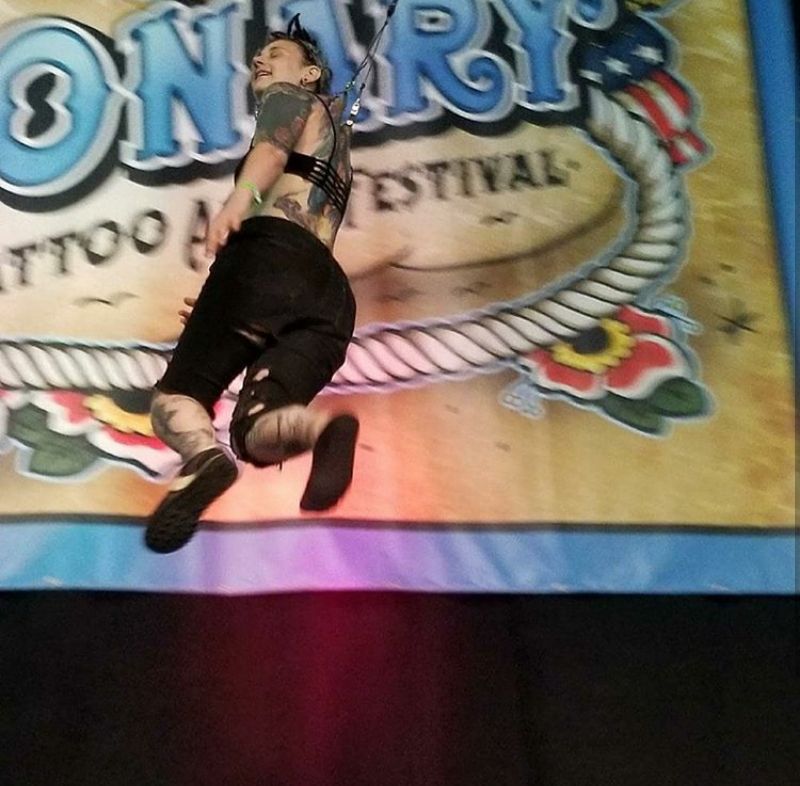 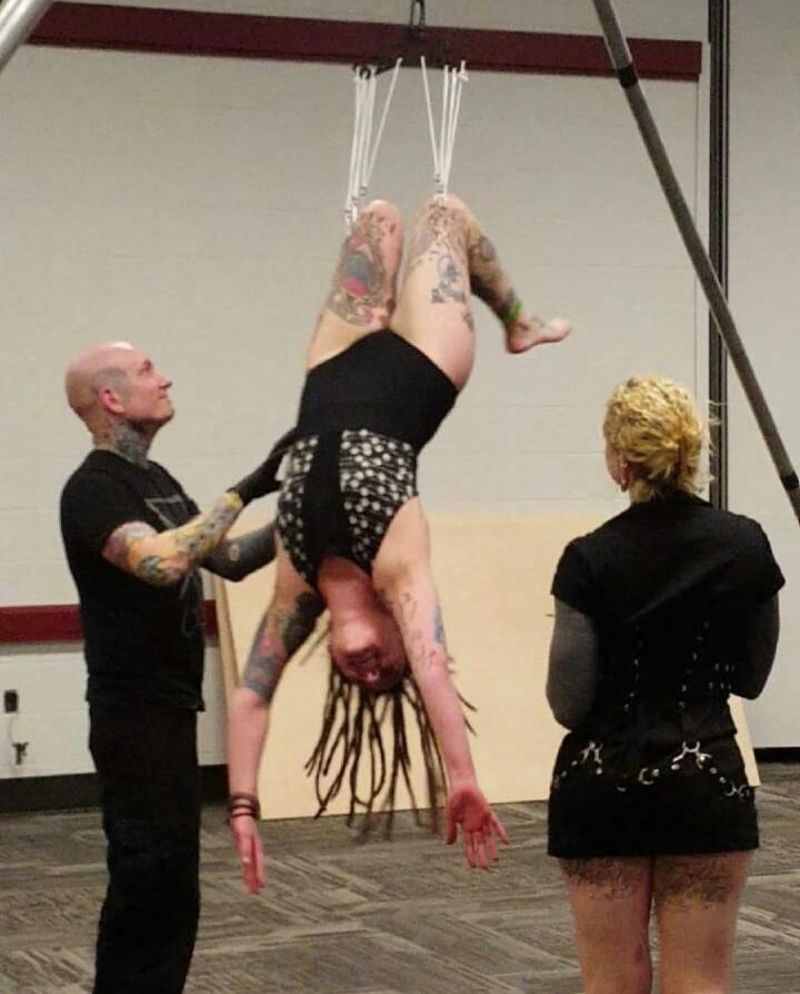 “whoa. this wasn't a private, personal thing anymore”.  My list of suspensions grew with my confidence. I was twenty-five.

I stood in front of an entire convention of people and told them to stare at my chest, as I hung from it on fakir's birthday, nine days after his death day. I was enlightened, inspired, and intimate with myself in ways I never thought possible. 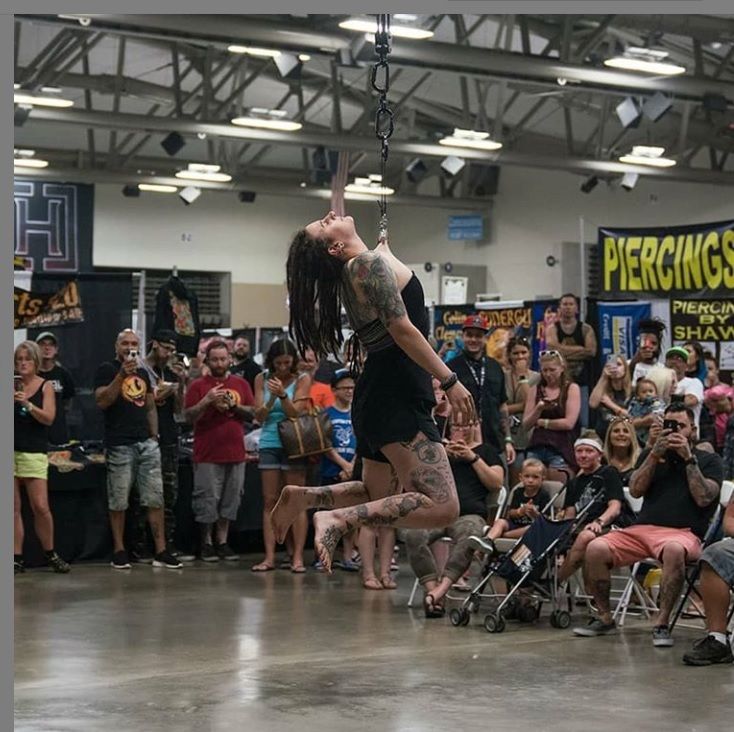 I soon got knocked down again. My blessed mother got sick and I tended to her until she passed on. It was rough. I grew quiet and became more careful of who I let myself love.

Ascension introduced me to Alissa Saft who introduced me to urban rituals. Alissa and I road tripped to Detroit and suspended in Theater Bizarre, two weekends in a row! IAM/BME seemed to be replaced with Instagram. that's where I met Patches. He encouraged me to socialize with the others at theater bizarre. I saw old faces and met new ones. 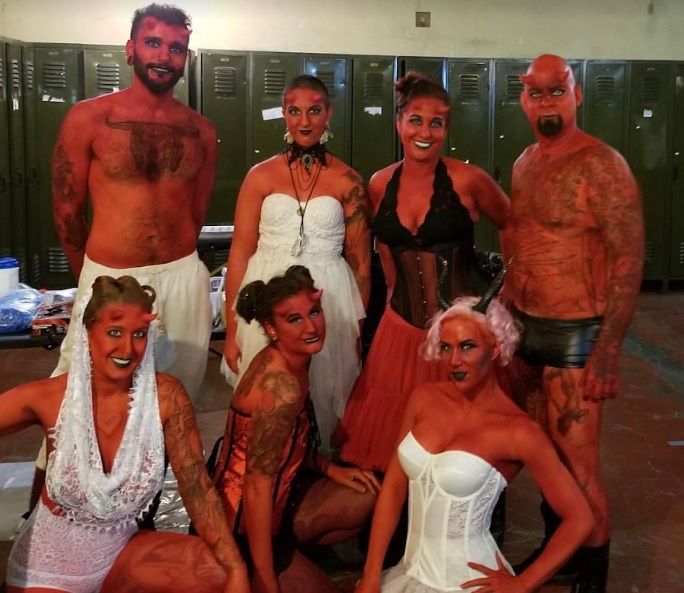 “Hey Ziggy! You're going to be partnered with Chad tonight.” I had the opportunity to shackle him to his rig at theater bizarre. Chad and I kept meeting up at suspension events. We traveled the country together and long distance dated. Now live together!

During this trip, I decided to say it, fuck it, why not? I told the group:

“I am removing my breasts and nipples in the next year or two. I am androgynous and don't identify with a gender.” I felt arms around me and heard congratulations. I cried. My family was here for me.

At the end of every year, I look forward to sending my hook family suspension themed holiday cards. I gave chad a mustad taped to a candy cane. 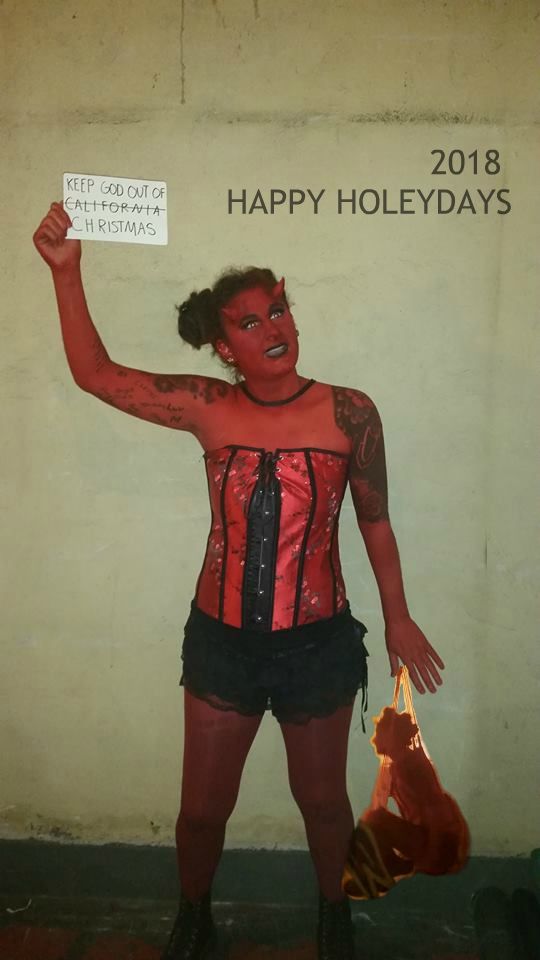 “I guess Santa couldn't fit a boob job onto his sleigh again this year, huh?” Except for my breasts, I was finally in love with everything I knew to be in my world.

I wasn't that miserable, isolated person anymore. I got my tongue split in Kaspa’s loft. Regina Spektor was playing when Brian Decker branded me. I watched skateboarding documentaries all night with Dom and ate pancakes with Steve. I shared a rig with Allen Falkner and Courtney Crave. I had the opportunity to perform with The Enigma. I am amazed to say my list of cherished memories goes on and on.  These people were no longer my on-screen idols, they were now my family. My family who appreciated me for being me.

“Are you alive? If you're alive please be okay.”

I couldn’t open my eyes because they were full of glass. I spit out a mouthful and yelled to the voice that I was okay. My first responder said I hydroplaned into a massive highway sign and rolled off road three times into a ditch. I had a badly bruised leg and rib but that was the worst of it. A hospital brain scan found an enlarged blood vessel in my left frontal lobe. I'm still fighting insurance to get that further examined.

A week after the car wreck I got the phone call: “you have been scheduled for your surgery on May 6.” Those traumas were bad, but not as bad as the gender dysphoria / body dysmorphia I lived through.  Pain doesn't live in the head, it lives in the heart. Suspension taught me that.

I love you all. 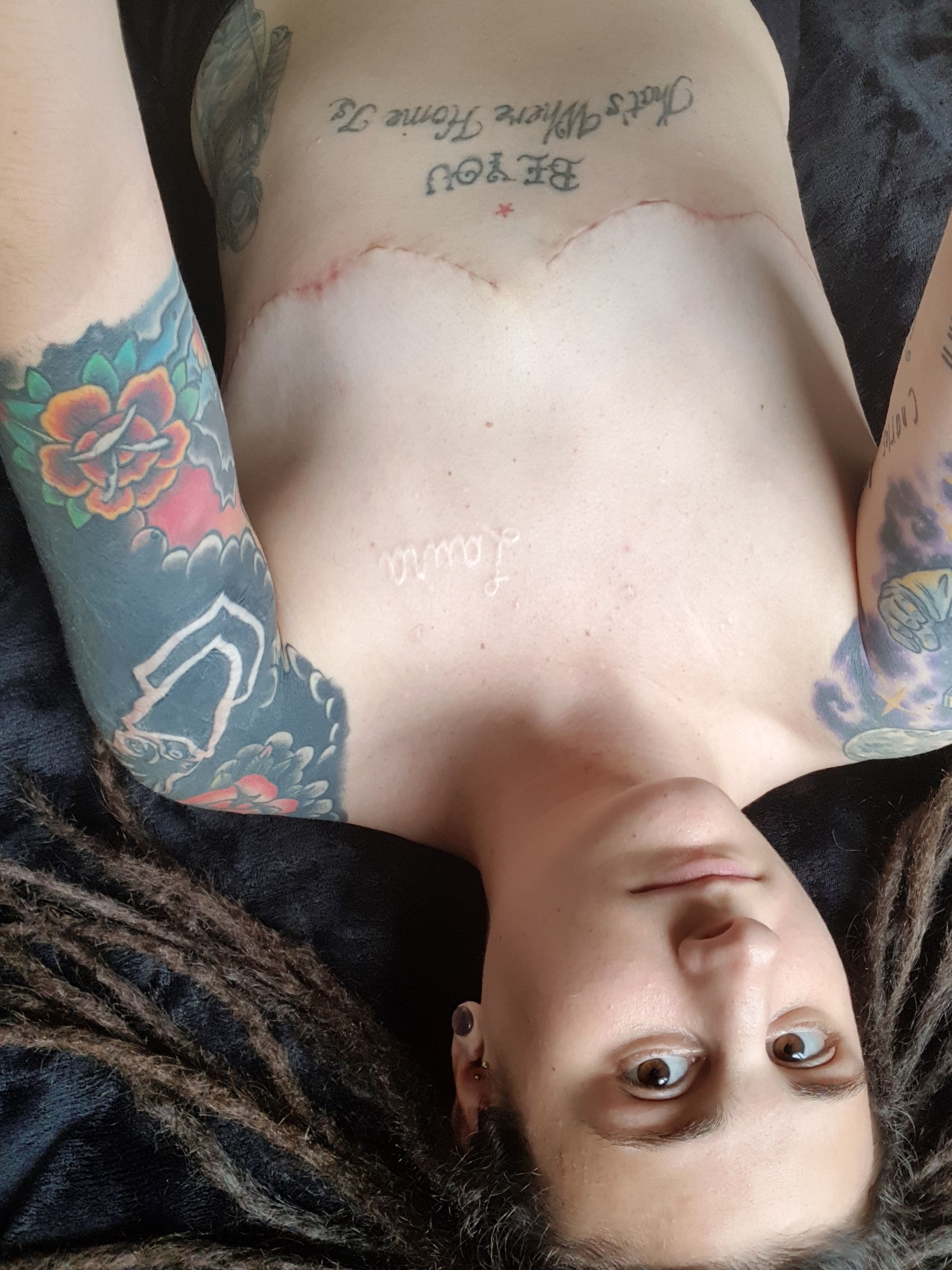 You Can find out more about Ziggy by following their instagram!

Editors note: I got the opportunity to meet Ziggy for the first time at Visionary Arts Tattoo Convention NJ this past weekend.  Really awesome to meet people you have been talking to online for a minute.  Thank you for being so rad Ziggy! 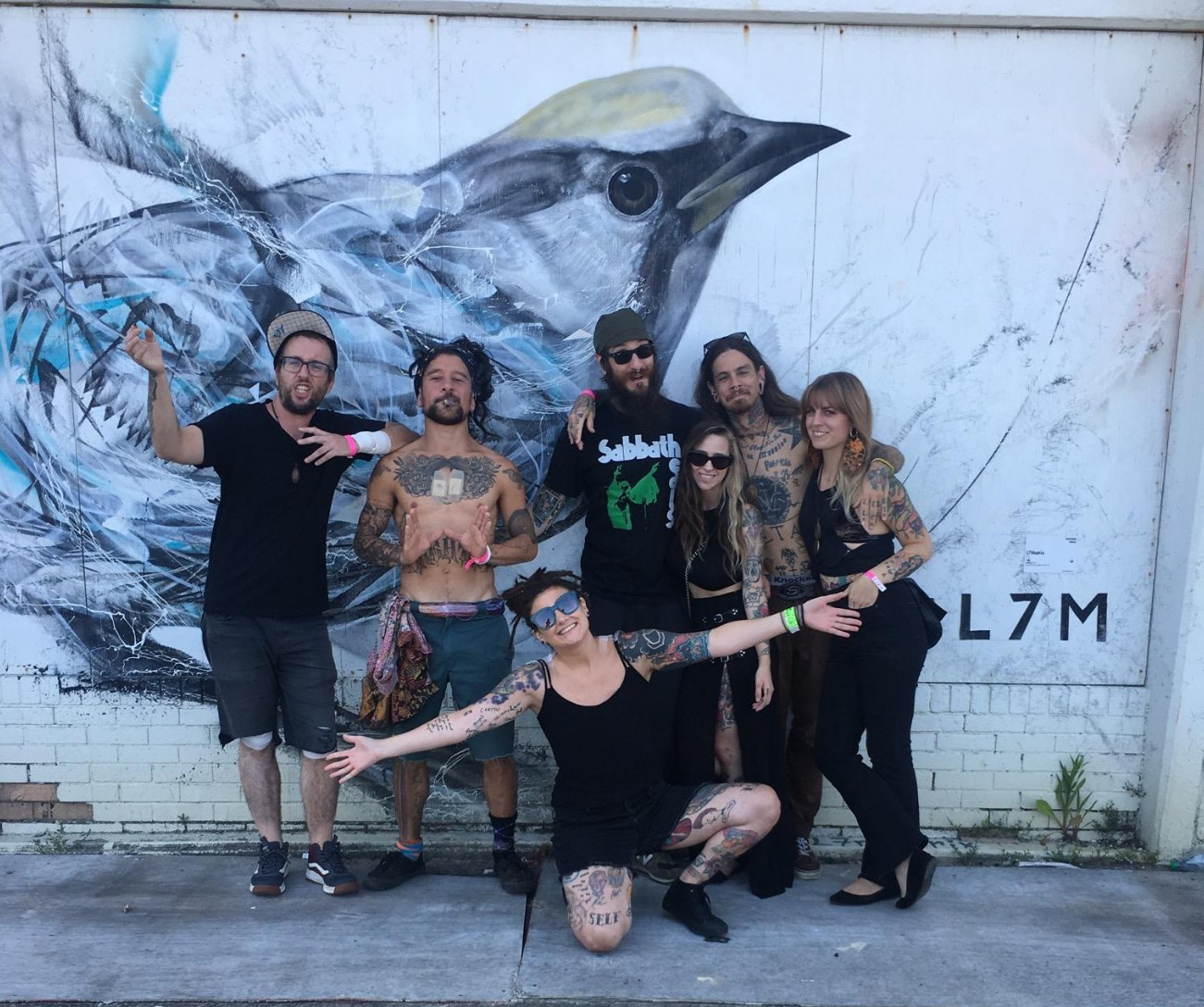